Property purchasers at Big Landing were promised that no private docks would interfere with their view of pristine marshes and creeks; the developer later asked the state to amend a permit to allow for private docks; SCELP is now handling the appeal of the permit modification which removes the restriction on dock construction for this Horry County development.
Support Our Work 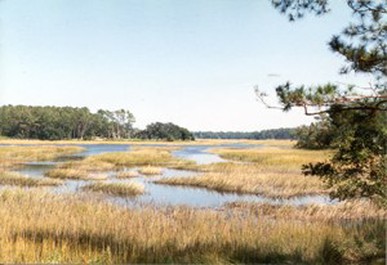 This case involves a Little River development known as Big Landing. In 1995, Big Landing obtained an OCRM permit to fill marsh for a roadway and to construct a large community dock. The permit was controversial. To address public concerns, OCRM imposed a special condition: the community dock would be the only dock allowed in the development. Lot sales began in 1998, and several people bought lots and built houses relying on the representation that no private docks were allowed.

Then former OCRM executive officer Wayne Beam bought a lot in Big Landing as an investment, and tried to get a dock permit to increase the value of his lot. When he was told that no private docks were allowed, he got the developer to hire him to apply for an amendment to remove the "no private docks" condition.

In 1999, he persuaded the OCRM staff to grant the amendment by arguing that the special condition could not be enforced since it was not recorded as a deed restriction.