The Cherry Grove area of North Myrtle Beach is the site of what is probably the most altered salt marsh estuary in South Carolina. The lower portion of this photo depicts the much developed Cherry Grove Subdivision. Immediately above this area (separated by a canal and below Williams Creek) is the undeveloped Heritage Shores area.
Support Our Work 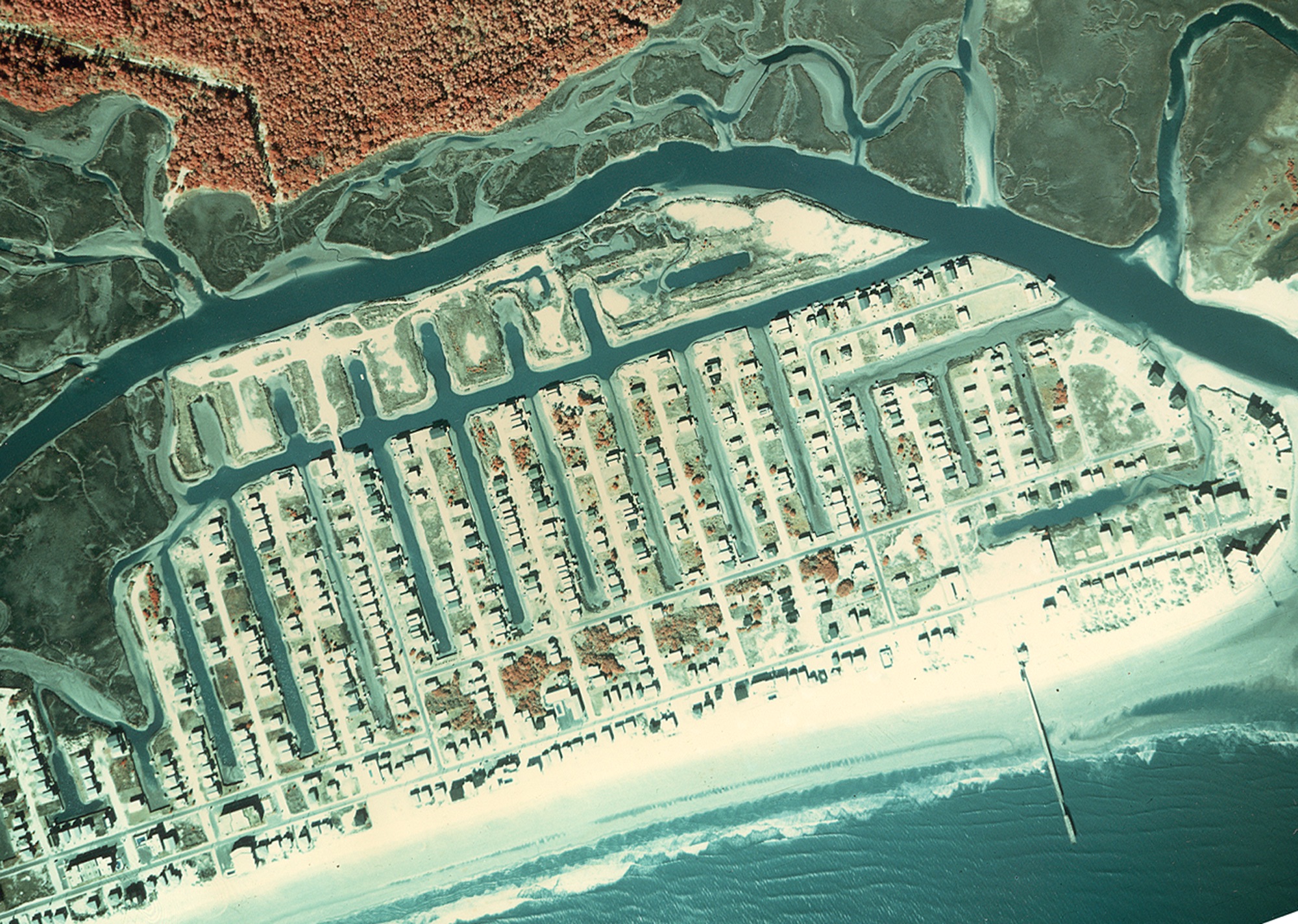 In 1998, SCELP filed an appeal of permits for wetland fill, bridging, and development of a filled-in marsh area in North Myrtle Beach; our clients are two groups and a large number of individuals loosely allied as neighbors; after winning our permit appeal, we negotiated a successful settlement that preserves about one-third of the proposed development area as a public recreation area; the file is open now only for monitoring compliance with the settlement conditions.

On March 30, 2000, SCELP won a coastal zone management permitting victory which could set a very favorable precedent. SCELP's Cherry Grove case, which was highlighted in SCELP's December 1999 newsletter (send us an email to receive a copy), involved proposed fill of salt water marshes to construct a road and bridge to facilitate development of an old filled-in salt marsh area.

As a result of SCELP's victory, the developer has initiated a series of legal maneuvers seeking to overturn that victory.

The latest maneuver is a lawsuit against SCELP's clients seeking damages merely for their exercise of their legal rights.

Between the late 1940s and 1968, a massive dredge and fill operation dramatically altered the landscape of the Cherry Grove area. Creeks and finger canals were dredged and salt marsh was filled to create residential building lots. Finally, a lawsuit filed by the South Carolina Attorney General halted the dredging and filling. Politics intervened to settle the suit with the State quit-claiming one last section of marsh. That last section of marsh was dredged and filled, but a new developer ran out of money and quit before any houses were built on this portion of the development, known as Heritage Shores. Since 1972, the portion of this marsh that was filled has eroded so that Heritage Shores now contains only limited areas of high ground interspersed with salt marsh and creeks.

In 1998, the Heritage Shores developer began an effort to complete the development, and filed an application for a coastal zone management critical area permit. The S.C. Office of Ocean and Coastal Resource Management (OCRM) granted the permit in 1999, and a group of Cherry Grove property owners, along with Sierra Club and the SC Coastal Conservation League, filed an administrative appeal with SCELP's assistance. The appeal hearing was held in November, 1999.

Administrative Law Judge John Geathers, who heard the appeal, issued an order which reversed the OCRM permit and a related water quality certification. He ruled that the agency had failed to comply with its own regulations, by failing to assess feasible alternatives, by failing to evaluate the cumulative effects of the project, and by violating the wetland fill regulations. The full decision is available on the Internet at the link below.

Judge Geathers ruled that DHEC and OCRM had relied on unsupported claims of the developer, and "did not fulfill [their] duty to consider adequately the feasible alternatives to the proposed bridge." He criticized DHEC's claim that the agency had no way to evaluate the long-term impacts of the project: "I find [DHEC's] statement incredible in light of [its] knowledge of the applicant's plans for the bridge and residential subdivision. There is no question that there will be potential stormwater impacts on water quality, and these impacts must be specifically addressed by DHEC.

Judge Geathers also denied the developer's motion asking the judge to remand the case to the agency for a second permitting review.

The developer appealed Judge Geathers' order to the Coastal Zone Management Appellate Panel. The Panel voted 5 to 4 to order Judge Geathers to send the case back to the OCRM staff to give the developer a second chance at securing its permits.

Following the Panel's ruling, SCELP filed suit in state court on behalf of a group of Cherry Grove residents and property owners, Sierra Club, and the SC Coastal Conservation League. Our suit alleges three claims: (1) the Panel's vote to give the developer a second chance was arbitrary and capricious; (2) the property does not belong to the developer, but rather should be declared to be owned by the State as public trust wetlands; and(3) members of the development group have violated the Coastal Zone Management Act by placing fill in marshes.

The developer responded to our suit with a motion seeking dismissal of our appeal of the Appellate Panel's ruling. In late November 2000, Horry County circuit court Judge Sidney Floyd granted the motion to dismiss. SCELP has appealed Judge Floyd's ruling to the South Carolina Court of Appeals.

Following Judge Floyd's ruling, the developer hired its third law firm and filed suit against 15 of SCELP's individual clients, and against Sierra Club and the South Carolina Coastal Conservation League. The suit alleges that SCELP's clients have committed an abuse of process, slandered the developer's title to the property it proposes to develop, and wrongfully interfered with the developer's contract to sell the property. It seeks actual damages in the stated amount of $4 million, plus unspecified punitive damages and attorneys fees and costs.

The developer's suit is clearly a "SLAPP" - a Strategic Lawsuit Against Public Participation. SLAPP suits are intimidation tactics sometimes used by developers who want to be rid of citizens who object to the environmental impacts of their projects. A team of law professors in Colorado and other researchers have documented the trend of the use of SLAPP suits as an intimidation tactic. This research has also shown that in the vast majority of cases, the SLAPP suits are unsuccessful. The professors have compiled a list of characteristics of SLAPP suits, and the suit filed by the Cherry Grove developer falls squarely within the SLAPP criteria.

In early January 2002, we signed a settlement agreement in this case. About one-third of the proposed Heritage Shores development has been turned over to the City of North Myrtle Beach and dedicated as a public park. The developer is building roads and other infrastructure for the remainder of the development, but the 1100-foot bridge originally proposed has been eliminated.

The settlement is a compromise that preserves at least a portion of Heritage Shores for public recreation. All of the high ground at Heritage Shores was created during a massive dredge and fill operation that went on from the 1940s through the early 1970s and which provided some of the motivation for the enactment of the SC Coastal Zone Management Act.