On behalf of the S.C. Coastal Conservation League and the Sierra Club-Winyah Group, SCELP filed a challenge to a permit issued by DHEC’s Office of Ocean & Coastal Resource Management (OCRM) to Debordieu Colony Community Association (DCCA) authorizing the construction of three groins on Debidue Beach.
Support Our Work 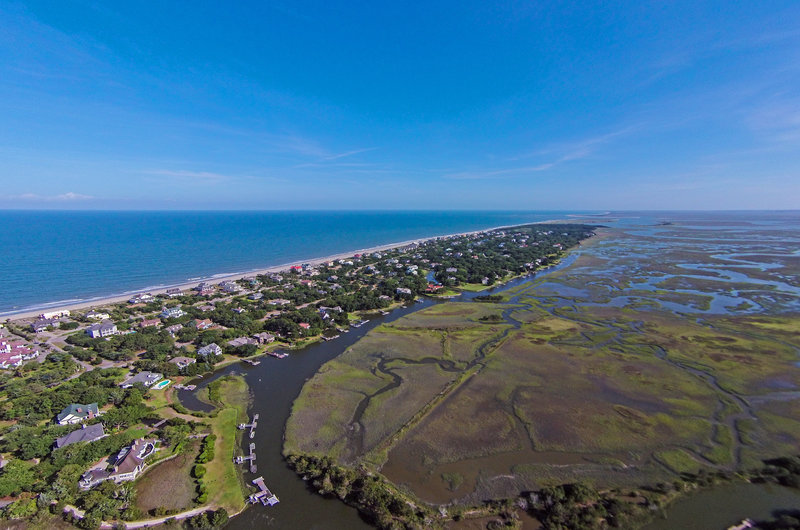 Groins are erosion control structures constructed perpendicular to the beach, typically in an effort to protect beachfront houses. The proposed Debidue groins would be constructed of an aluminum sheetpile wall, concrete fill and bolstered with granite rock, and would extend approximately 300 feet into the ocean.

The groins were intended to protect a narrow strip of oceanfront houses that were built well-seaward of other oceanfront houses at the southernmost tip of Debordieu Colony. The houses were armored with a partially-failing seawall, which was built parallel to the shoreline. The houses were unwisely built seaward of adjacent houses due to artificial beach accretion that resulted when canals were dredged in the salt marsh and the dredge material was placed onto the beach, in essence extending the shoreline seaward.

Debordieu Colony is adjacent to the North Inlet/Winyah Bay National Estuarine Research Reserve (“NERR”) in Georgetown County. In particular, the area proposed for the groins is at the south end of Debordieu Colony, closest to the NERR. This NERR is one of the few pristine estuaries left in the United States and one of only 28 NERRs in the country. The majority of the waters of North Inlet are classified as Outstanding Resource Waters – the highest water classification in the state. Scientists have been conducting long-term ecological studies at the NERR for decades because it is a test control site for the normal functions of estuaries. SCELP worked with Rob Young, Director of the Center for the Study of Developed Shorelines and a recognized national expert on coastal geologic processes. Dr. Young and his colleagues have formally recognized that groins damage downdrift beaches by preventing the natural transport of sand. The groins trap the sand moving downdrift through longshore transport and prevent it from naturally nourishing downdrift beaches.

The regulations applicable to groins state that groins “may only be permitted after thorough analysis demonstrates that the groin will not cause a detrimental effect on adjacent or downdrift areas.” Dr. Young testified that the proposed groins will inevitably cause a detrimental effect on adjacent and downdrift areas, especially in light of their proximity to such an ecologically important and sensitive area.

The Baruch Foundation, which manages the North Inlet/Winyah Bay NERR also filed an appeal and SCELP worked together with its attorneys to challenge the agency’s decision. A trial date was set for April 17-19, 2011, but we successfully resolved this case when Debordieu Colony agreed to withdraw its request for the three groins and only renourish the beach with an offshore source of sand.