Dioxins are environmental pollutants. They belong to the so-called “dirty dozen” - a group of dangerous chemicals known as persistent organic pollutants (POPs). Dioxins are of concern because of their high toxicity. Experiments have shown they affect a number of organs and systems. Dioxins are unwanted by-products of a wide range of manufacturing processes including smelting, chlorine bleaching of paper pulp and the manufacturing of some herbicides and pesticides.
Support Our Work 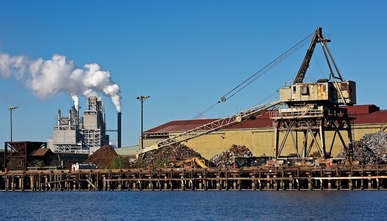 In the mid-1980's, the US Environmental Protection Agency (EPA) learned that some paper mills were discharging dioxin into streams with the mills' wastewater. In 1988, EPA conducted a comprehensive study of the effluent of all 104 of the nation's bleached-paper mils. The study found that the International Paper Company mill in Georgetown had the highest dioxin discharge level in the nation, an estimated 600 parts per quadrillion (ppq).

Today we know much more than we did in the '80s, but there is not any good news about dioxins. Something we knew already is that dioxin bio-accumulates in fish tissue at rates exceeding 5,000 times the dioxin concentration in water. Although some states had banned fishing in areas with dioxin levels below that found in the Sampit River and Winyah Bay, DHEC officials only issued a "fish consumption advisory" warning Georgetown residents that they might want to limit the amount of fish they eat from the RIver, or "to consult your physician."

In 1990 DHEC announced the intention to adopt a 1.2 part per quadrillion standard, the most lenient approved by the EPA (who was challenged in federal court by NRDC and other national organizations). DHEC then moved to amend IP's permit to add a dioxin discharge limit, setting it at 90 ppq until June 30, 1992 (reduced to 70 after a public outcry) and 27 ppq thereafter.

Although the paper industry's clout led South Carolina to adopt a weak dioxin standard, SCELP kept pushing. Eventually, IP achieved major reduction in its dioxin discharges, an met the goal established by SCELP, the League and Sierra Club - a goal that IP had earlier dismissed as impossible without tremendous expenditures.

From the outset, the Georgetown County League of Women Voters ("League"), represented by SCELP, worked to limit the discharge and alert South Carolinians about the dangers of dioxin exposure. In 1991, the League appealed DHEC's decision on the IP permit levels. The appeal was put on hold for almost 2 years while DHEC undertook a 5-year review of IP permit, which ultimately confirmed the 27 ppq limit (over 20 times higher the already lenient water quality standard adopted a few years before by the agency). We reactivated our appeal, focusing on the "dilution formula" relied on by DHEC, which had been criticized by scientists at the Baruch Marine Laboratory given the specific circumstances of a tidal estuary such as Winyah Bay.

Moreover we insisted that the Clean Water Act required DHEC to set the limits based on the "best available technology" and recent operations of IP's Georgetown mill had produced discharges of less than 10 ppq. The Sierra Club, also represented by SCELP, intervened in the appeal and we eventually forced a settlement satisfactory to our common sense requests in the public health interest.