After over 15 years of legal proceedings, in 2000 SCELP finally won the Sierra Club's appeal of the permit for the hazardous waste landfill located on the shores of Lake Marion in Sumter County, and the landfill has since been shut down.
Support Our Work 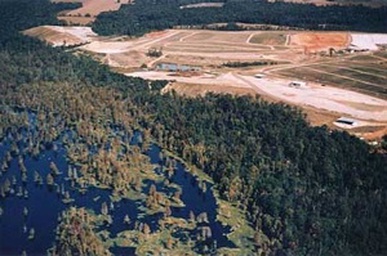 On September 25, 2000, the Safety-Kleen (formerly Laidlaw) landfill near Pinewood closed. The closure was the direct result of SCELP's victory, on behalf of Sierra Club and Energy Research Foundation, in January, 2000, in the South Carolina Court of Appeals.

This victory came after 15 years of persistent efforts by SCELP attorney Jimmy Chandler. The landfill, which never should have been permitted to operate at only 1200 feet from Lake Marion, has been described by the South Carolina Department of Health and Environmental Control (DHEC) as posing "a much greater degree and duration of risks to the public health and environment than any other facility located within the state."

Unfortunately, the long-term ecological and economic consequences of such environmental disaster are still affecting South Carolinians and will keep doing so for a long time.
‍

One couldn't find a worse location in the United States for a hazardous waste landfill.

The Pinewood landfill has been described by several nationally-recognized landfill experts as a terrible place to bury hazardous waste. Dr. Joel Hirschhorn, formerly with the Office of Technology Assessment, a technical advisory arm of Congress, testified that "I've reached the conclusion that the location of the landfill is just terrible, basically. One couldn't find a worse location in the United States for a hazardous waste landfill." Dr. Hirschhorn's testimony continued: "Location is of paramount importance because from a scientific perspective, one just cannot escape the conclusion that every component of a landfill system, every technology used, will fail, and the only ultimate way to protect health and environment is to understand and accept the fact that one does not have long-term effectiveness and reliability in landfill technology itself, and so the best preventive approach is don't put a landfill close to anything that matters. You don't put a landfill close to drinking water supplies, in terms of groundwater, and you shouldn't put a landfill close to valuable ecological assets."

Dr. Hirschhorn's views have been echoed by Dr. Kirk Brown, who helped write national standards for landfills, and by the U.S. Agency for Toxic Substances and Disease Registry.
‍

DHEC actions will cost us all, well into the future

DHEC recognized in 1985 that the landfill had serious flaws that will require an eventual cleanup. That year, a DHEC report recommended requiring the company to guarantee the availability of at least $100 million to pay the clean-up costs. But DHEC allowed the company to get by with just a flawed $30 million insurance policy. After a new independent study for DHEC confirmed the landfill's flaws and risks and recommended a $114 million trust fund for clean-up, DHEC made the trust fund a special condition of the landfill's permit in 1989. But then in 1992, while the permit was under appeal, DHEC agreed to allow the company to eliminate the trust fund requirement, and also agreed to double the landfill's permitted capacity. In 1994, the DHEC Board reinstated the trust fund requirement (now up to $133 million to account for inflation). But less than a year later new DHEC Board members adopted new regulations which again eliminated the trust fund.

Concerns about the landfill's location led the South Carolina General Assembly in 1990 to enact a requirement that DHEC adopt location standards for all hazardous waste facilities. The standards were adopted in 1991, but DHEC decided that the Pinewood landfill's existing cells would essentially be "grandfathered" under these standards.

Another winning round of appeals

The Court of Appeals upheld the permit, but then made rulings which led to the landfill's closure. The Court of Appeals rejected the landfill capacity set by the DHEC Board, saying it was arbitrary and capricious, and reduced the capacity to 2,250 acre-feet. The Court of Appeals also ruled that the new DHEC regulations are invalid, and reinstated the $133 million trust fund requirement. Safety-Kleen petitioned for rehearing, and asked the SC Supreme Court to hear another appeal, but both efforts were unsuccessful.

After the SC Supreme Court rejected the landfill's appeal, DHEC told Safety-Kleen that the landfill must close, because the capacity limit has already been exceeded. DHEC also ordered Safety-Kleen to close due to violations of financial responsibility requirements.

Safety-Kleen then filed bankruptcy in Delaware, on behalf of the parent company and all subsidiaries. Safety-Kleen also filed suit in Federal Court against DHEC, arguing that DHEC violated a long list of constitutional provisions when it said that the landfill would have to close. The company asked the Federal Court to allow it to continue operating pending trial on the new suit. On August 25, 2000 Federal Judge Matthew Perry told the landfill that it would have to close on September 25 unless a Federal Appeals Court granted its request. On September 22, the Federal Fourth Circuit Court of Appeals rejected the landfill's request, and the landfill closed the following Monday.

The Fourth Circuit Court of Appeals heard additional arguments on December 8, 2000, in Richmond, Virginia. SCELP founder Jimmy Chandler presented arguments during that hearing. In December 2001, the federal Fourth Circuit Court of Appeals denied the landfill's appeal, affirming the ruling that had led to the closure of this hazardous waste landfill in September 2000.