In the summer of 2016, beachwalkers on Isle of Palms and Harbor Island raised concerns about experimental plastic seawalls that were obstructing the beach and interfering with sea turtle nesting.
Support Our Work 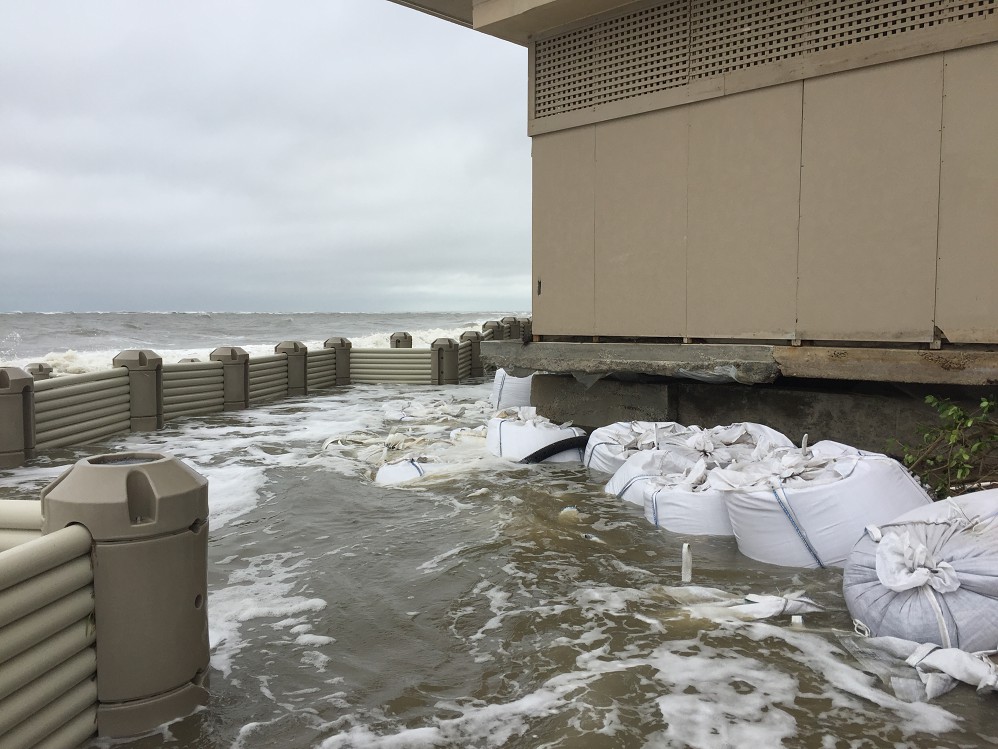 In response to the concerns, SCELP promptly sent out a notice letter to federal and state agencies alerting them that these walls are a violation of the Endangered Species Act (“ESA”) on behalf of the Sierra Club and the S.C. Wildlife Federation (“SCWF”). The ESA prohibits interfering with nesting and reproduction of protected species, including endangered sea turtles that return every year to lay eggs on South Carolina’s beaches.

In response to reported false crawls (mother sea turtles were crawling up to the seawalls, known as Wave Dissipation Systems or WDS, and then retreating back to the ocean, unable to reach nesting habitat), SCELP sent a letter in June to South Carolina Department of Health and Environmental Control (“DHEC”). At first, DHEC staff responded swiftly to protect sea turtles by asking the experimental seawall study participants to take them down by July 28, 2016. However, that victory was short-lived. Fourteen separate appeals, called requests for final review in the administrative process, were filed with the DHEC Board. The environmental groups filed a motion to intervene, which was denied. However, the DHEC Board did decide to hear the case.

The board held a hearing on September 8, 2016, but only heard from DHEC staff and proponents of the seawalls. DHEC staff stood by their recommendation to take the walls down. Blair Williams, a manager in the wetlands permitting section of DHEC, stated “We believe it was the right decision, and we still believe it's the right decision.” Brad Churdar, DHEC’s attorney, supported the staff decision and added that false crawls do constitute a take within the meaning of the ESA. However, the DHEC Board disregarded the staff recommendation and ordered the seawalls to remain in place on October 10, 2016. On behalf of Sierra Club and SCWF, we filed an appeal of that decision before the Administrative Law Court on November 9th.

On December 6th, we filed an ESA complaint against DHEC, claiming that experimental plastic seawalls are harming endangered wildlife in violation of the ESA.

Since then, the DHEC Board overruled its staff again on another issue related to the experimental seawalls: whether these walls are effective emergency structures (they are not) that should be more widely authorized in place of sandbags and other emergency measures (they should not). The study of Wave Dissipation Systems was conducted by the Citadel under the supervision of DHEC staff. One of the purported advantages to these experimental seawalls is that they are supposed to be easy to take down during nesting season. However, that was not done during nesting season in either 2015 or 2016 and is again precluded under DHEC Board's most recent authorization for the walls to stay up.

Only one month after the DHEC Board ignored its staff's conclusion that experimental plastic seawalls on South Carolina beaches do not work and should be removed, the seawalls are largely in a state of ruin or even abandonment, with several broken parts littering and polluting the surrounding environs. On July 21, we asked the federal judge for a preliminary injunction requiring immediate removal of the walls, based on turtle nesting attempts that have been blocked in 2017, for a third consecutive nesting season.

The figurative tide turned against the WDS last summer.

In August 2017, the Federal District Court in Charleston agreed with us that the plastic seawalls harm nesting sea turtles in violation of the Endangered Species Act. Not only that, but the Court determined that the harm was so imminent, and the public interest so strong, that immediate removal of all the walls was necessary. Federal preliminary injunction orders, especially those requiring as much action as this one, are rare and powerful. The order was granted only after intensive proceedings during which a large group of property owners attempted to intervene and convince the Court not to order removal. The order is “preliminary” in that it only applies while our endangered species case is pending, but it portends our ultimate success in the case. The walls were removed at the property owners’ expense, and it appears that many of those owners have seen “the writing on the wall” and have given up on reconstruction.

The disruption caused by the court-ordered removal of the plastic seawalls, euphemistically dubbed “wave dissipation systems” or “WDS” by the inventor, as well as the realization that the WDS were very likely doomed, led the various WDS proponents to pursue and enter a settlement agreement bringing an end to the program. This settlement also ended the various state challenges we had been forced to bring in opposition to the DHEC Board’s repeated authorizations for these walls to stay in place.

While a positive outcome for turtles is the main message here, one should not overlook the calamity caused by the DHEC Board’s particular disregard of the agency’s mission in relation to these structures.

In addition to the obvious environmental and policy consequences of such actions by the Board, we taxpayers have footed an enormous bill for DHEC’s subsequent unjustified and doomed defense of these structures. Countless agency staff hours, as well as consultant fees, were put into generating a report that the DHEC board essentially ignored, and then DHEC was forced to hire an outside law firm to defend the agency and advocate for these obviously flawed structures in federal court.